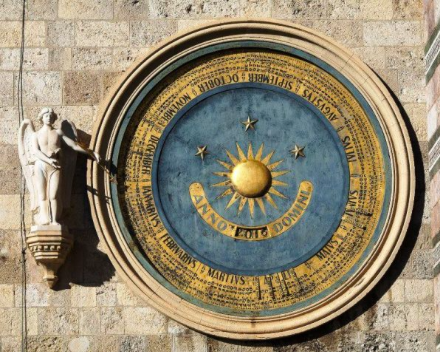 It was the archbishop of Messina, Angelo Paino, who wanted its construction after the disastrous earthquake and tsunami that hit the city on the strait in 1908. In fact, in this context, the high prelate assumed responsibility for coordinating the reconstruction operations. The pope of the time, Pius XI, would have advised Paino to take the famous Strasbourg clock, made in 1354, as a model. Not surprisingly, the Messina watch was completed in three years by Theodore Ungerer’s company, coming from Strasbourg, while, the technical part was entrusted to the German engineer Frederic Klinghammer. It was, however, Francesco Valenti, superintendent of the monuments of Sicily, to carry out the design of the bell tower, attempting to replicate the style of the previous bell tower, from the Middle Ages, even if the latter with its 90 meters high, exceeded 30 meters the tower built by Valenti, 60 meters high.

Of course, the peculiarity of the bell tower is due to the astronomical clock that marks the flow of hours, days and liturgical time.

This watchmaking jewel was inaugurated, in the presence of about 70,000 people, on August 13, 1933. The clock is made up of different parts distributed in different floors of the bell tower. At the stroke of noon, refined and complicated mechanical devices set the scenes in motion. The first is characterized by the movement of a crowned lion, symbol of the city, which moves its head and tail, waves the Messina flag and roars three times. The lion represents the people of Messina victorious in the Vespers war. Following there is the rooster that flaps its wings and sings, a symbol of awakening and therefore of the city’s rebirth. After it’s time for the church of Montalto, its construction is reproduced, dating back to 1294.

According to legend, a dove, flying, indicated to the people of Messina the place where to build the church, in fact the clock devices make the statue of a dove hover in the air.In the meantime, a model of the church emerges from the ground, all under the intoxicating and engaging atmosphere of the Ave Maria by Schubert.