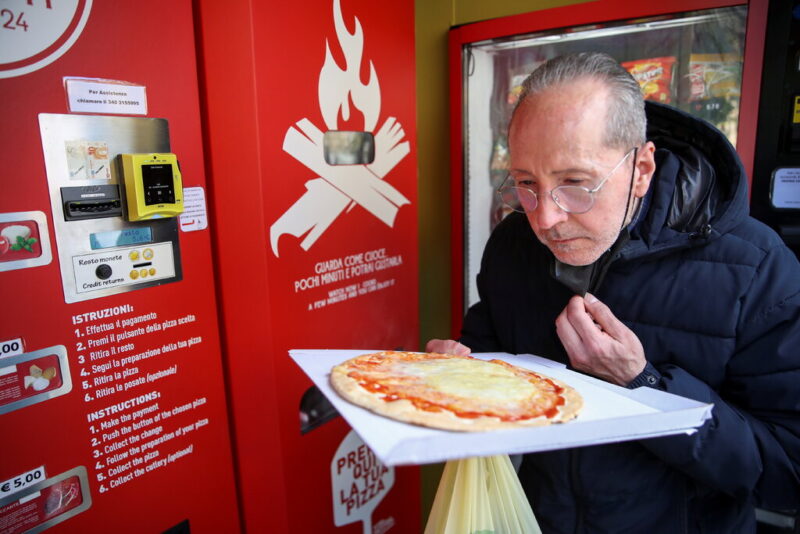 Romans eat pizza all the time.

They have pizza a taglio, cut with scissors to the desired size and heaped with toppings, for lunch. They snack on pizza bianca, without anything on it, or pizza rossa, with just tomato sauce, or pizzette, little pizzas. “Pizza scrocchiarella,” round and thin crust, the type Americans might best recognize, is almost always reserved for dinner.

Essentially, Romans will eat pizza, here and there, they will it eat anywhere. But would they, could they, eat it out of a vending machine?

Massimo Bucolo, a medical device salesman turned pizza entrepreneur, is betting they will. He has installed Rome’s first no-hands pizza machine in a bustling neighborhood within walking distance of the capital’s main university.

He’s hoping that the vending machine — which makes a fresh pizza from scratch in exactly three minutes — will catch on with Rome’s pizza-loving population, especially after hours, when traditional spots are closed and the clientele is, shall we say, less discerning.

“I’m not trying to compete with pizzerias, I’m proposing an alternative,” Mr. Bucolo, 46, said one recent evening shortly after he had topped up the machine with cheese.

The reactions so far from pizza aficionados are perhaps what you’d expect in a city that gave birth to one of the world’s first cookbooks, believed to have been written during the first-century reign of the Emperor Tiberius. Granted, Rome is not Naples; in 2017 UNESCO put the thousands of Neapolitan pizza makers, or pizzaiuoli, on its Representative List of the Intangible Cultural Heritage of Humanity. But Romans are at least as devoted to their pizzas, UNESCO recognition or not.